Construction of Barracks Buildings, Lake Wabaunsee, Kansas When this photo was taken in December of 1933, the barracks buildings at the Kansas Emergency Relief Committee’s Transient Camp were being constructed by George Rinner Construction Company of Topeka, Kansas. Photo courtesy Bill Treu.

In 1925 the Kansas Forestry, Fish and Game Commission was formed, and soon that agency began constructing state lakes across Kansas. In Wabaunsee County, a group of sportsmen, businessmen and community leaders organized an attempt to convince the Fish and Game Commission to build a lake in their county. With the creation of various depression-era projects in the early 1930s, the group hoped that such a project could be established along the spring-fed waters of Mill Creek.

After years of promotion, the project became reality in 1933 when the state announced that the Kansas Emergency Relief Committee (KERC) would establish a transient camp in Wabaunsee County for the purpose of constructing a lake. The major stumbling block to the lake’s construction was that the state would only built lakes on donated land. To meet this demand, the Lake Wabaunsee Corporation was formed in September 1933 to sell private lots along the south shore of the proposed lake. Planners believed that sales would raise the sufficient capital to purchase the necessary 500 acres of land required for the construction of the lake.

In December 1933, building contractor George Rinner began construction of the work camp, including barracks buildings, a dining hall, and a recreation hall.  In January of 1934 workers began to arrive and started clearing timber in the valley. Transient workers constructed a blacksmith shop, shoe shop, barber shop and the caretaker’s house located at the east end of the dam.

In March 1935 the first heavy machinery began to arrive by rail in Eskridge and was then transported to the lake site. Workers began to dynamite the rock ledges along the west shore near the proposed spillway. The primary job of the KERC project was site preparation. Hundreds and hundreds of trees were felled in the valley, cut into firewood, and used to heat the barracks and other buildings.

However, the KERC’s days were numbered. The agency was dissolved, as more aggressively funded New Deal programs replaced the state-funded ones. By August of 1935, work at the Lake Wabaunsee transient camp had ceased operations with only 15% of the project completed.

The Works Progress Administration (WPA), a stalwart of the Roosevelt administration’s New Deal recovery programs, assumed control of the Lake Wabaunsee project on January 1, 1936. Forty additional camp buildings from recently closed KERC projects in Howard and Sedan were moved to the Lake Wabaunsee complex, bringing the total number of buildings to sixty.

The 160 former KERC workers who were stranded at Lake Wabaunsee when the transient camp closed were employed by the WPA, while an equal number of new workers were brought to the camp. Work on the dam continued around the clock with banks of lights fed by generators installed at the dam site. In July 1936, project engineers determined the dam construction to be faulty, and the dam was removed to the ground level and rebuilt. Again, in November engineers determined the dam to be insufficient, and it was redesigned to be five feet higher.  Despite these setbacks, on December 31, 1936, the dam was complete.

Despite the success with the completion of the dam, work continued at the lake, including the construction of roads and bridges. And, there was a problem in that the property on which the lake was built was mortgaged, and sales of lots by the Lake Wabaunsee Corporation had fallen short of meeting that obligation by $11,000. Members of that organization appealed to the County Commission for the funds, without success, and then appeared before the Eskridge City Council.  Support for the lake was strong in Eskridge, and when a bond election was held on March 26th, the proposal passed with a vote of 236-136.

In August of 1937, the valve on the dam was closed and water impounded, and the lake began filling. On October 1st, State Game Warden, L. C. Webb supervised the release of 32,000 fish in the new lake.

In November of 1937 the City of Eskridge held a lottery for the selection of lots on the lake. One hundred and twenty-five lots were selected by investors in the Lake Wabaunsee Corporation. Eddie Morris of Topeka drew the number allowing him the first selection of lots, selecting the lot located at 11 Rocky Ledge Road. Morris was also the first permanent resident on the south shore of Lake Wabaunsee.

This 1936 photo by Volland, Kansas shopkeeper, Otto Kratzer, features a view of the Works Progress Administration barracks building and the construction of the lake’s spillway. Rock was blasted from the spillway bed and crushed to various sizes of gravel, seen in the foreground.

This aerial view of the Lake Wabaunsee construction site is dated September 11, 1937 and shows the lake shortly after water was impounded at the earthen dam. To the right of center one will notice that the lake’s water had not reached the barracks complex, and the arms of the lake were still dry land at this point in time. Photo courtesy Bruce Taylor.

While the lake was substantially full in 1938, the roads and bridges around the lake were still under construction, making it sometimes difficult for property owners to access their lots. Throughout 1938 and the first half of 1939, the WPA workforce was steadily reduced in size, as road work was completed.

On August 24, 1939 the WPA camp closed and all workers vacated the facility as the county prepared for the grand opening of the lake.  On August 26th, the grand opening celebration was attended by hundreds as the lake officially opened for picnicking, boating and fishing.

Within months of the lake’s opening, problems arose with the integrity of the dam. There was a leak at the control gate, and the valve could not be closed. A diver from Kansas City unsuccessfully attempted to plug the outlet valve. With no other solution available, the City of Eskridge plugged the entire control tower with concrete, abating the leak but rendering the control valve permanently inoperable. 1940 saw the completion of the roads, bridges, bath house and boat dock.

In June of 1940, the National Youth Administration announced that a NYA camp for training in metal fabrication and sea plane construction would be established at the lake. The opening of the NYA camp signaled the increasing role of the Department of Defense in government relief programs as war loomed in Europe.

In the summer of 1941, Kansas Power and Light began setting poles and running electric lines to the lake, first to the NYA camp, and then to the cabin owners on the south shore. On June 12, 1941 heavy rains filled the lake to capacity, as water began exiting over the spillway for the first time.

The NYA camp saw significant expansion in 1941 when it was announced that the camp would become part of a national defense program. Early in 1942 the camp went into “war production training”, with the welding and machine shops working two shifts. In December of 1942, the NYA camp was suddenly closed and the equipment moved to a facility in Emporia.

In April of 1943, the 9th Armored Division at Camp Funston leased the lake camp from the City of Eskridge as a recreation center for troops heading overseas. During the summer of 1943, some 8,000 soldiers rotated through the lake camp in groups of 500 for swimming training and recreation. That camp closed in September.

January of 1944 found the camp empty once again, and Wabaunsee County Extension Agent, Howard Myers had a plan to make use of the abandoned camp and help area farmers who were strapped for labor. Myers and area farmers appeared before the Eskridge City Council, pleading to rent the lake camp for a Prisoner of War work camp. By 1944 most able-bodied men were in the service, and area farmers were desperate for labor. The City Council agreed to host the POW camp.

Prisoners were transported to and from their work places on the backs of trucks and performed jobs without guards. There was never an escape attempt from Camp Number 5, although escape attempts were quite common in most POW camps. Most prisoners worked on Wabaunsee County farms and ranches, but prisoners also worked on construction jobs, building houses and some worked for the County Road and Bridge Department. Prisoners were fed lunch each day by the “employer” who used their labor.

On December 1, 1945 the POW camp closed permanently, all prisoners were returned to the main camp at Concordia, and the facility was returned to the City of Eskridge, closing the most eventful dozen years in Lake Wabaunsee’s history. 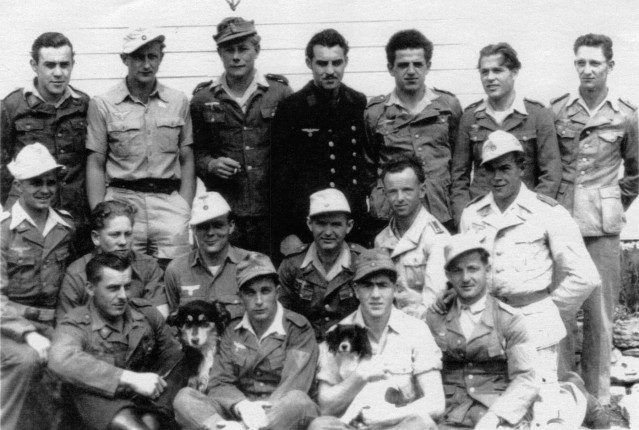 Seventeen German prisoners of war pose for a photograph outside one of the barracks buildings at Camp No. 5 at Lake Wabaunsee, Eskridge, Kansas. This view is rare in that the German prisoners are seen in their military uniforms rather than their normal work clothes marked with the letters P and W. Photo courtesy Penny Clark.

See more images of the construction of Lake Wabaunsee by following the link below: