The Mount Mitchell Heritage Prairie Preserve is a 50-acre hilltop prairie dedicated to Captain William Mitchell and the Connecticut Kansas Colony. Located three miles south of Wamego on highway 99 at Mitchell Prairie Lane. It is open to the public from dawn to dusk, 365 days a year.

William Mitchell and his fellow colonists were abolitionists who came to Kansas Territory in 1856 to insure that Kansas would enter the Union as a state free of slavery. They settled at Wabaunsee, on the Kansas River in northern Wabaunsee County.

They arrived during “Bleeding Kansas” when anti and pro-slavery proponents were in armed conflict with each other over the issue of slavery. Many historians now believe that the first shot of the Civil War was actually fired at the Battle of Black Jack in Douglas County Kansas on June 2, 1856 rather than at Ft. Sumter in 1861.

The Colony’s departure from Connecticut became national news when the Brooklyn, New York preacher Henry Ward Beecher helped raise funds to arm the colonists with Sharps rifles. When he sent a check to the leader of the group, Charles Lines, to pay for the rifles, he included a case of Bibles from one of his parishioners. Newspaper headlines proclaimed, “Bibles and Rifles for Kanzas” and the colony began to be called, “Beecher’s Bible and Rifle Colony.”

Today, the church these and previous settlers built at Wabaunsee is called the Beecher Bible and Rifle Church. 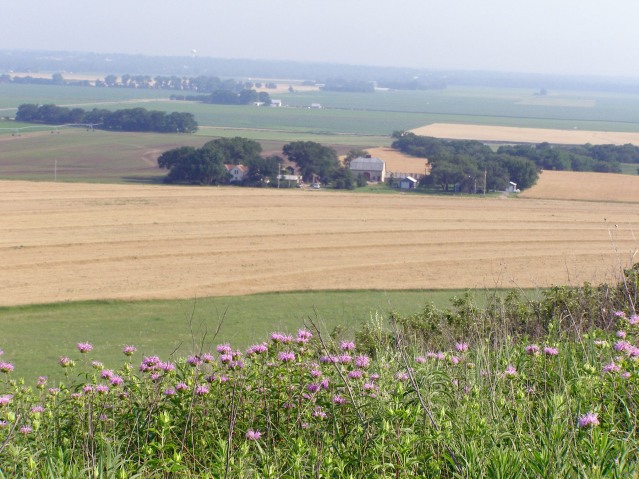 Visitors to Mount Mitchell will enjoy panoramic views from atop the hill.

The Mt. Mitchell Heritage Prairie Preserve was originally part of Captain Mitchell’s farm. He was captain of the Prairie Guards, the local Free-state militia, and an Underground Railroad conductor and stationmaster.

The park was created in 1953 when W.I. Mitchell, his youngest son, bequeathed 30 acres of the farm’s tallgrass prairie to the Kansas State Historical Society.

A group of school children enjoy a hike up the trail at Mount Mitchell.

The territorial road known as the Topeka Ft. Riley Road passes through the eastern edge of the preserve. Enslaved people seeking their freedom on the Underground Railroad used this road between 1857 and 1861.