The Silver Moon Ranch rodeo arena was located in Farmer Township of Wabaunsee County on the Frank Ranch. The ranch hosted a gala annual rodeo which drew large crowds from across the state. Photo courtesy Trish Ringel. 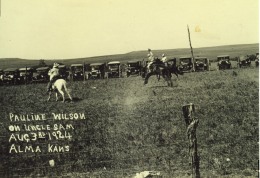 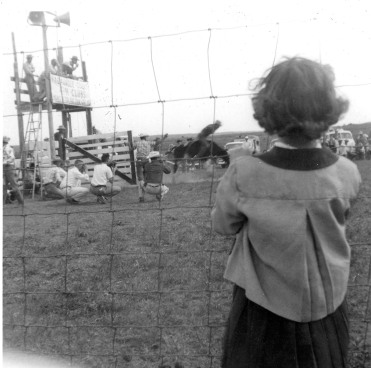 Cleo Schultz competed in bull riding and other rodeo events across the country. In this view, dated 1962, Schultz is seen riding a bull at the Tulsa Stampede. Photo courtesy Cleo Schultz.

Cleo Schultz, Volland, Kansas, is seen in this 1960s view, competing in the bulldogging event at the rodeo grounds at Mayetta, Kansas. Photo courtesy Cleo Schultz.

Ron Pletcher, Eskridge, Kansas, is seen in this 1959 photograph riding a bull during a night rodeo. Pletcher competed on the professional rodeo circuit in the 1950s and 1960s. Photo Courtesy Shirley Pletcher.

These Flint Hills cowboys stop for a small celebration after a successful rodeo, circa 1959. Dale “Little Red” Wilson, left was known to be a great storyteller, and a second, unidentified cowboy, center, and Ron Pletcher appear to be enjoying the tale. Photo courtesy Shirley Pletcher.