When I met Jake Copeland, he was retired and living on “the point” at Lake Wabaunsee. He had closed Jake’s Place, his bar in Eskridge, and was enjoying life at the lake.  Years later, after Jake’s passing, I met a few folks who told stories of Jake’s Place and their friendships with Jake Copeland.

It was a funny thing, however, there was a mystique about the events which transpired at the small-town bar, and my sources were quick to tell me not to “mention anyone’s names,” even after a half-century had passed since the bar’s closing. “I wouldn’t want to embarrass anyone,” one source confided to me. The disclaimers and demands for anonymity prompted me to ask for more tales of the bar.

Jake’s Place was a working man’s bar. A source described the clientele, “I never saw women enter Jake’s unless it was a woman who was not from Eskridge.  My Mother would never go in at all.  If Dad was there and she needed something, she’d park the pickup on the street and send me inside to tell him what was needed.  It was just an understanding that “good” women didn’t frequent the local bar.  I probably only saw 1-2 women inside and I believe those were on Labor Day Rodeo weekend.  Jake used to have booths on the south wall (away from the bar) and I recall a pair of men/women sitting there.  It was a surprise.

Likewise, there were unwritten rules for men, too.  Such as, men didn’t wear shorts into Jake’s.  Jake’s Place was for “working men”, i.e. farmers, hired hands, ranchers, wage earners, etc.   I recall seeing a prominent rancher from Alma come in one time in plaid shorts.  For a young boy, to see a man wearing “Bermuda” shorts in Jake’s was quite funny to see.  He was the only grown man I ever saw in Eskridge wearing shorts, other than to swim at Lake Wabaunsee.”

One person told me that their father, a local Eskridge merchant, would sneak away at about 4:00 pm each day to enjoy a beer with other locals at Jake’s Place before heading home for the day. The spot was popular across the social strata of Eskridge.

Another source who spent a lot of time at Lake Wabaunsee recalled that if one “ran out of beer after hours” they could drive their boat to Jake’s dock at the lake, and he would replenish their supplies.

Jake Copeland sits on his dock at Lake Wabaunsee in this view from the 1960s. Photo courtesy Jim Sapp.

A former patron recalled visiting Jake’s Place as a boy, “He always treated me and other boys, who were quiet and not a distraction, with respect.  He was very kind.  I usually sat at the bar and looked at his collection of beer signs, trophy fish heads, etc. and listened to the silly stories the men told.  Often I sat right by Dad and as he drank a PBR or later, a Budweiser, and I’d drink a can of tomato juice.  Sometimes Dad would spring for a hot sausage (which Jake usually had sitting right on the bar.  I think they were a dime as was the juice.  6 pack of beer was maybe a $1.65).” 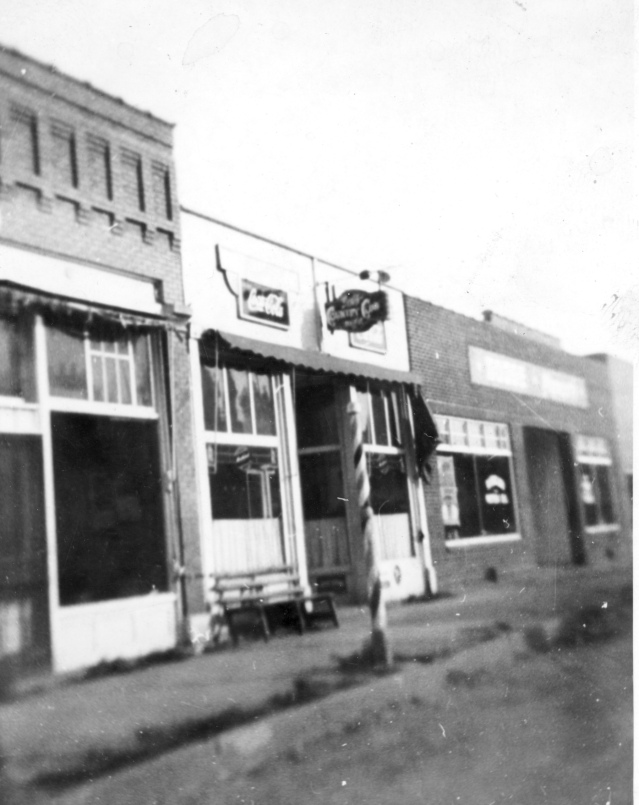 Another story relates, “There were several men gathered at the bar, telling stories and bragging about their ability to drink liquor.  One rather large man said that if need be and he was thirsty enough, that he could drink booze from a boot.  Of course, the men dared him to do it.  So, he took off one of his own boots, what we called “engineer boots” in those days.  Someone poured a significant amount of beer into the man’s boot and he proceeded to drink it all without stopping to take a breath.  Of course, this elicited lots of hooting, hollering and laughter.”

Sometimes events got a little more exciting, “Okay, no names, but here’s a story.  I often sat in an old wire-backed chair and watched men play dominos or cut-throat pitch.  One afternoon, a group of 5 men were playing pitch, one on each side with the 5th man sitting on a corner.  I sat with the chair turned backwards, leaning on the back of the chair on a corner with a man between me and the 5th man on a corner to my right.  After several hands were played, the corner man surprised everyone by punching the man between us with a hard right hand to the side of the face.  He claimed that the man had been cheating by looking at his hand of cards.  The man who received the punch was a quiet man by nature, a bachelor who lived just outside of town.  He denied that he’d looked at the fellow’s cards.  He had a gash on his face where his wire rim glasses had smashed into the skin.  The glasses were bent.  The other men at the bar quickly intervened and threw out the aggressor with the suggestion that he go home and sober up.  He had been drinking beer.  The game resumed with the 4 remaining players.  After perhaps 30 minutes had passed, the front door flew open and in stepped the aggressive puncher.  He had what appeared to be a .38 snub nosed pistol.  He pointed it in the general direction of the “cheater” and made a verbal threat to shoot him.  No sooner had he done this (which took perhaps 10 seconds or less) than the men at the bar quickly disarmed him and held onto to him.  Jake put the gun under the bar somewhere and called the man’s wife to come get him.  I can’t recall exactly what happened to the man, but I think a couple of the intervening men took him outside and stayed with him until the man’s wife came.  And once again, the card game resumed.  No one called the law.  In the eyes of the men, it was taken care of.  I never heard what happened to the gun.  I don’t know about my Dad, but I never mentioned anything about the incident to Mom.  I doubt he did either.  Funny, but other than the surprise, I don’t remember being scared.  Of course, the gun being pulled made us all jump, but it was over so quickly, I didn’t have time to be scared.  Dad never said a word to me.  He had been up at the bar, too.  I don’t remember if he helped.” 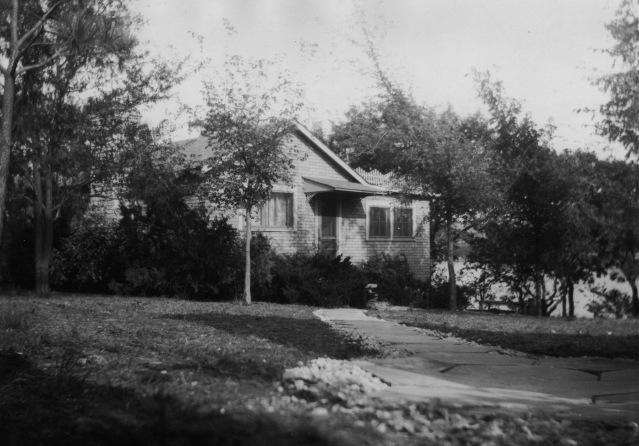 This house on Lake Wabaunsee was built by Eddie Morris. After Morris’ death the cabin was purchased by Jake Copeland, Morris’ son-in-law. Photo courtesy Jim Sapp.

My source reminded me, “Of course, whatever happened at Jake’s wasn’t discussed at home.  I never mentioned anything.  I didn’t want Mom to veto me going with Dad.  Jake used to answer the phone (which hung under the end of the bar) with his old growl of a voice.  If it was someone’s wife asking if her husband was there, Jake would loudly ask, “Has anyone seen so-and-so?”  Of course, no one answered, so Jake would politely say, “No one says that they’ve seen him,” and that was the truth.  Shortly thereafter, the man in question would leave Jake’s.   It would seem that “what happens at Jake’s stays at Jake’s.”