This is a photograph of the Sweeney Bridge, an iron bridge under construction over the Kaw River in early 1911. The bridge was located in Kaw Township in Wabaunsee County and crossed the river into Pottawatomie County about three miles south of St. Marys, Kansas. 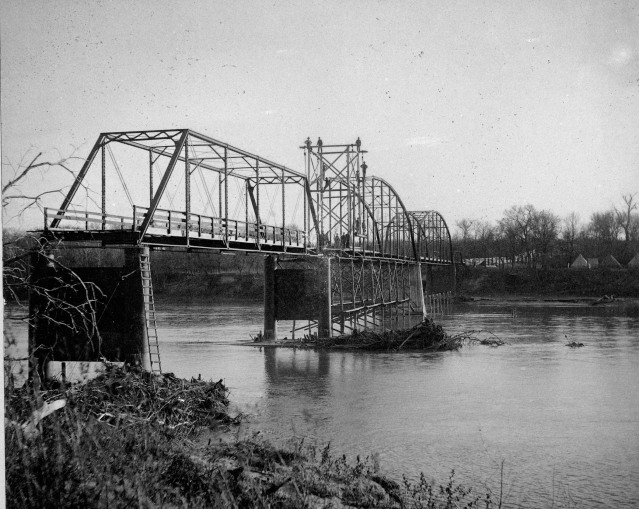 Workers from the Missouri Valley Bridge and Iron Works of Leavenworth, Kansas are seen building the second arch of the Sweeney Bridge.

There was an interesting history leading to this bridge’s construction. Originally, the bridge crossed the river at what was known as the Bell crossing, about a mile upstream from the bridge seen in this photo. The 1903 flood moved the river’s course along three miles of river which included the Bell Bridge. Part of the river changed course, and even the direction of the flow of water reversed during the massive 1903 flood. In late 1903, a new bridge was constructed at the Bell crossing. The new bridge washed away in 1904 and was replaced with another bridge. During the winter of 1904, ice destroyed the new 1904 bridge, and it was replaced with yet another bridge.  In the Spring of 1905, a new iron bridge was constructed over the Bell Crossing which contained two arched spans, along with approaches on both sides. The bridge was barely completed when a tornado ripped down the river valley at the crossing, knocking one of the two arched spans into the river. Amazingly, the span was hoisted from the river bed and replaced on the pilings, and the bridge was used until the flood of 1908 which destroyed both approaches, leaving the two arched spans, “high and dry” in the center of the river. In 1910 County leaders sought funding to rebuild the bridge; however, there was considerable sentiment among Kaw Township residents to place the bridge one-mile east of the Bell crossing at what was known as the Sweeney crossing. There was difficulty in obtaining adequate funding to construct the new bridge, and in an effort to save money, the County contracted with the bridge construction company to move the two arched spans of the Bell Bridge a mile east and incorporate them into the new Sweeney Bridge. The Sweeney Bridge was completed in mid-summer of 1911, and it collapsed during a flash flood in July of 1950.

In this photo, one can see workers from the Missouri Valley Bridge and Iron Works of Leavenworth, Kansas reconstructing the second of the two arched spans from the Bell Bridge at the site of the new Sweeney Bridge. Notice that the approach from the near side is not complete. Also, one can see tents on the opposite shore, probably used to house bridge workers during construction.