Editor’s note: This story of the Stanley Funeral Home was compiled with personal recollections of Judy Stanley Hayes who was a toddler while her family resided in Eskridge, Kansas, supplemented with photos and family stories told by her parents. I’d like to thank Judy Hayes for sharing her family’s history with our readers.

Raymond Stanley was born in 1911 at Erie, the county seat of Neosho County, located in southeast Kansas. Raymond attended the Erie public schools, graduating from high school in 1929.  While a senior in high school, Raymond landed a job at an Erie funeral home, driving the ambulance, and it was while employed at that job that he suffered a back injury which would follow him for years.  When graduating from high school, Raymond’s ambition was to attend college and medical school, but the family’s economic circumstances at the onset of the Great Depression made that dream unattainable.  Raymond was the eldest of five children, and in 1929 even a high school education was considered a luxury to many.

Raymond considered becoming an undertaker, but that training was expensive, as well, and beyond the family’s reach.  Raymond’s grandfather interceded on the boy’s behalf, offering to pay for his grandson’s training in undertaking school, if Raymond would agree to handle the services when his grandfather’s time on earth had ended.  Raymond accepted the offer and enrolled in the Williams Institute of Embalming, located in Kansas City, Kansas.

Lillian Siever and Raymond Stanley pose in front of a steam locomotive while dating, circa 1937.

In 1932 Raymond graduated as a licensed embalmer and undertaker, but initially, he could find no funeral home that was hiring.  The business, itself, was one that historically passed through families, and he found it difficult to get his first break.  So, Raymond landed a job as a salesman for Royal Bond Chemicals, selling embalming fluid and funeral garments to funeral homes.  The job kept Raymond on the move, traveling in a territory that included Kansas and Missouri.  It was during Raymond’s days as a chemical salesman that he was introduced by an Erie physician, Dr. Emory Bryan, to Lillian Siever, a student at the University of Missouri at Columbia. Their first meeting was a blind date. Dr. Bryan was a friend of Lillian’s father, Dr. Charles M. Siever, of Manhattan, Kansas.  At her father’s insistence, Lillian had attended college at K-State for one year before transferring to M.U. to study journalism.  Raymond and Lillian began dating steadily, despite Raymond’s time on the road.

Raymond and Lillian Stanley pose in front of the columns at the University of Missouri at Columbia while on their honeymoon in 1938.

While traveling on his sales route, Raymond was always looking for an opportunity to enter the undertaking business during a time when opportunities were scarce.  It happened that while in Eskridge, Kansas he met William “Scully” Waugh.  Waugh was a banker and cattleman whose father had come to Eskridge in the “early days”.  Scully forged a friendship with the young, ambitious salesman, and when he learned that Raymond was looking for a place to establish a funeral home, Scully suggested that he would help Raymond establish a mortuary in Eskridge.  The only funeral home in Eskridge was owned by George Martin, operating downtown in the building that would later become Dunn Home Supply at 118 S. Main Street.  Perhaps it was that Martin was aging, and Waugh was concerned that the town would be left without an undertaker; the Stanley family always believed that Waugh was somewhat disgruntled with Martin, but for whatever reason, Scully offered to help Raymond establish a funeral home in Eskridge.

The Stanley Funeral Home was located at 321 South Main Street in Eskridge, Kansas.

George Wilson, a business associate in the chemical business and his wife, Daisy of Thayer, Kansas, loaned Raymond money to purchase instruments, while Scully Waugh loaned the Stanleys $800 to purchase more equipment and a hearse. Scully rented the Stanleys a home located next door north of the Waugh mansion for $20 a month in which Raymond operated his funeral home and the young family lived.

Raymond Stanley stands in front of his first funeral coach purchased for the Stanley Funeral Home in Eskridge, Kansas.

The offer from Waugh was a dream come true for Raymond Stanley.  He proposed marriage to Lillian, and she accepted, and the couple wed in 1938 and immediately moved to Eskridge. In the first year of operation, Raymond Stanley held nineteen funerals in Eskridge.  In 1938, a public water system had yet to be established in Eskridge, and the Stanley’s home had no running water. Lillian Stanley wrote, years later, “The house had no running water and no gas for heating or cooking and no refrigeration.  We cooked with kerosene and had an ice box. …and of course, the little “restroom” outback.  But…you know …we loved it.”

Raymond and Lillian Stanley pose with their daughter Judy in front of the Stanley Funeral Home in Eskridge, Kansas, circa 1942.

In 1942 Raymond and Lillian Stanley’s first child, Judy, was born at a Topeka hospital, as the young couple’s family grew. The Stanleys made many good friends in Eskridge, and as both Raymond and Lillian enjoyed fishing, they purchased a cabin on the newly constructed Lake Wabaunsee, located three miles to the west of Eskridge.

Scully Waugh’s wife, Betty, was a special friend to Lillian Stanley, a young mother. Judy Hayes remembers her mom’s friendship with Mrs. Waugh. “I do remember Mother saying that Betty Waugh was so good to her.  As I understand it, Mother was a little nervous about staying in the funeral home at night when Dad got called out, so Betty would come over and stay with her.  Also, I had colic, and Betty would come relieve and console Mother frequently.” 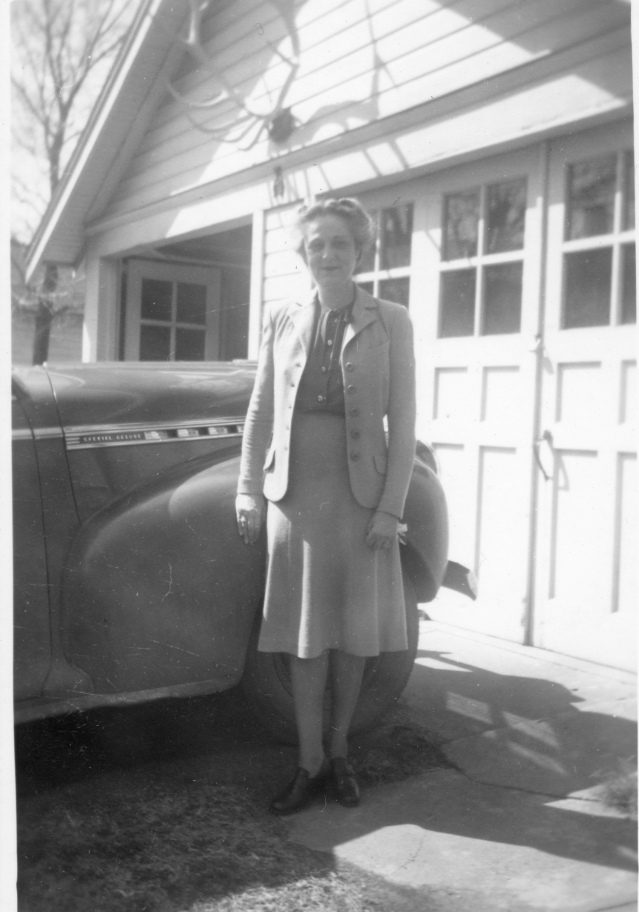 Betty Waugh stands outside the garage at her home in Eskridge, Kansas, circa 1940. Photo courtesy the Waugh family.

Bill and Pansy Wakefield lived behind the Waugh home, and they became good friends of the Stanleys, as well. They had a young daughter, Jerri Lu, who became a childhood playmate for toddler, Judy Stanley. For years after the Stanleys had left Eskridge, they returned with some frequency to visit old friends who included the Waughs and Wakefields.

Jerri Lu Wakefield, left, plays with Judy Stanley on the porch of the Stanley’s Eskridge, Kansas home, circa 1944.

One special friend of the Stanley family was “Grandma Mae” a nearby neighbor who doted on their young girl and often babysat Judy when funeral services were being held. Unfortunately, Grandma Mae’s last name is lost to history.

Judy Stanley, right, celebrates her second birthday with Grandma Mae. The Stanley Funeral Home in Eskridge is visible in the background.

Late in 1946 the Stanleys had an opportunity to purchase a funeral home in Baldwin, Kansas, and Raymond moved his Stanley Funeral Home to that Douglas County town. Raymond found a buyer for his Eskridge funeral home business, by that time the only mortuary in town, selling it to returning World War II veteran, Ira Austin.  Austin moved into the former Stanley Funeral Home and operated there for a year or two until he constructed a new funeral home on the southeast corner of town.

Shortly after moving to Baldwin City, the Stanleys had a second child, Clark Raymond Stanley who would later join his father into the funeral home business. After staying for a time in Baldwin, the Stanleys purchased a funeral home in Parsons and later one in Pleasant Hill, Missouri, near Kansas City, from which Raymond would ultimately retire before moving to Grand Lake at Grove, Oklahoma.