A touring car passes through Keene, Kansas on Kansas Highway 4 in this photo circa, 1920. Photo Courtesy Ida Thomas.

The Keene Store opened at the intersection of K-4 Highway and Bradford Road in 1874. Notice in this view that when this photo was taken the store was two stories and had full storefront on the east side of the building as well as the north side. An early blacksmith shop is visible at the right. When this photo was taken, the road was still mud and the store had no gas pumps. Photo Courtesy Ida Thomas.

When this photo of the Keene Grocery was taken in the 1950s, the store had gas pumps very near the edge of K-4 Highway. By this time, the east addition to the store was just a one-story structure.

An unidentified an stands in front of the blacksmith shop at Keene, Kansas in this view, circa 1920. Notice that the Keene School is visible to the right, located quite near the blacksmith shop. Both buildings were located at the intersection of K-4 Highway and Missile Base Road. 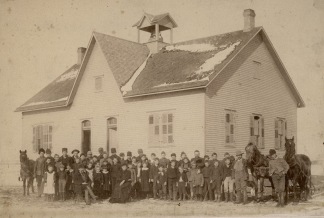 The Keene School, District 56, located in the town of Keene, was built in 1886 and closed in the late 1960s with statewide consolidation. In this view, circa 1890, a large group of students are photographed in front of the two-room school.

This native stone home was constructed for Ambrose Wade at Keene, Kansas in 1875. Wade was a very prominent rancher and cattle producer in Wabaunsee County. This photograph was created as a tintype. Photo Courtesy Robert Beach.

Ambrose Wade moved to Keene, Kansas on March 28, 1868 where he settled with his wife Orra and his children, Harmon and Dolson. Wade served as a county commissioner, on the board of examiners and the state legislature. He was known as a successful cattle rancher, and in 1900 Wade owned more than 2,900 acres of land in Wabaunsee County.

Keene, Kansas is located on Kansas Highway 4 about five and a half miles west of Dover, Kansas. Some of the earliest settlers of Wabaunsee County settled a mile east of Keene in 1856 at a small settlement referred to as Fremont, Kansas. One of the earliest businesses in the area was a cheese plant, first owned by Ambrose and Orra Wade and later by Thomas Rutledge. In 1872 the town was moved further west, a mile from its original location and officially named Keene.